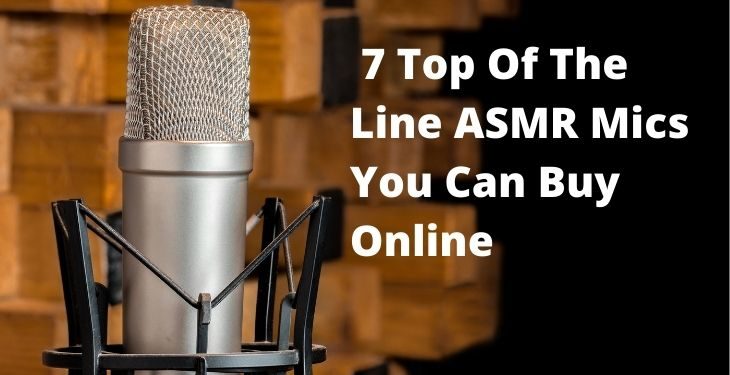 ASMR or Autonomous Sensory Meridian Response, we will just call it ASMR, is the new internet trend and has been taking over in the past years. People seem to love it, love it so much that even celebrities have started to give ASMR interviews as a part of their promotion, that’s how big ASMR has become.

Why do people love it? Its reason is simple, it is because people find it pleasing to hear, they find it aesthetic and it calms their mind. I mean who wouldn’t like some ambient noises to calm your mind? So now we know why prefer ASMR but the question is why a dedicated microphone? We can’t use some random microphones because ASMR recordings need to be precise and clear. Now that I’m done lecturing you we can look at the 7 best ASMR microphone in the market right now:

We're an Affiliate​ We hope you love the products we recommend! Just so you know, we may collect a share of sales or other compensation from the links on this page. Thank you if you use our links, we really appreciate it!

I have recommended this sleek looking microphone to a lot of people because who wouldn’t want a mic with 4 pickup patterns and 3 condensers?! It has zero latency output, compatible with multiple operating systems, easy to operate and gives an amazing output.

Let’s talk about its 4 pickup patterns. Normally microphones have one or maybe two patterns but this is one has four: Omnidirectional, Cardioid, Bidirectional and Stereo each with its purpose. This makes the Blue Yeti mic remarkably versatile and accurate in picking up soft ASMR sounds.
Along with its four pickup patterns it also has three condenser capsules which help the microphone to capture sound more accurately and broadcasts quality audio. Produces your high quality and accurate ASMR sounds.

The microphone is extremely easy to operate and has manual control buttons for almost all functions like headphone volume, pattern selection, instant mute and microphone gain. These features come in handy if you want to make some quick changes, especially during live streaming. It also has a no latency monitoring feature which monitors your voice real-time mixed with system audio which produces overall great audio.

The mic is also easy to set up as it does not require any software installations, just plug and play. Even though it does not matter much the microphone has a stunning minimalistic design which is available in multiple colours. You can also adjust and pivot the microphone’s position according to your desire to get better quality.

I have put its price as a con just because I want you to know it costs a bit but, to be honest, it’s worth every penny you spend. The pickup patterns and condenser capsules are remarkable. It has a stunning design and easy to operate too. If you are not restricted by any budget and willing to spend some money to get high-quality mic then you can go for this. 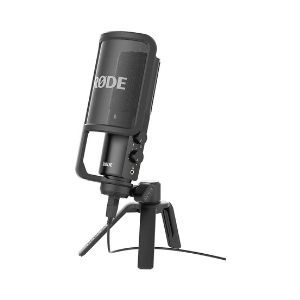 You cannot go to a list and not see a Rode microphone there because they are the market leaders in here. The Rode NT is a great example for their quality with a great cardioid pickup pattern and versatile usability, all these under a reasonable price range.

That’s where their pop-up shield comes in. their pop shield eliminates background noises and unnecessary rumblings so that your audio is crystal clear. It comes in handy doing ASMR recordings. You can the 3.5mm stereo headphone jack to monitor real-time zero-latency monitoring. I cannot emphasize how important zero latency is for dedicated ASMR microphones.

The direct mix between microphone input and source output produces remarkably quality audio. Even though it is not discussed majorly a stable stand is necessary when you are about to record intricate sounds. This Rode microphone comes with a stable tripod stand and a ring mount which avoids rumblings while recording.

As I said before Rode are market leaders when it comes to microphones and Rode NT just proves that. It offers a wide range of features at a reasonable price. It still is over 100 USD but I will say it is worth it as its highly sensitive microphone and pop-up filter help well in ASMR recordings. 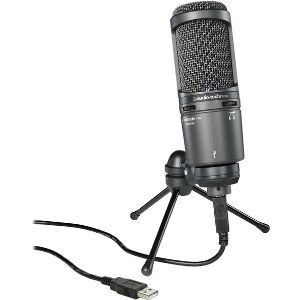 Audio-Technica AT2020USB+ even though is a really weird name is a great option for ASMR recording. Its cardioid polar pattern and incredible condenser help you with accurate sound capturing. It’s easy to use, highly compatible and comes with a headphone jack.

The built-in microphone can be used for real-time audio monitoring. It helps you mix real-time recording with the system producing great quality. Its high-quality A/D converter with 16 bit ensures that.  The microphone is compatible with almost all versions of Windows and Mac OS which gives you huge freedom in terms of connectivity.

As this mic is dedicated for digital recording this wide range compatibility comes handy. It also has a smooth extended frequency response which gives you a stable recording for a long period without any interferences.

This is a great microphone with amazing features. Has an incredible condenser and polar pattern for accurate sound capturing. Smooth frequency response for a stable recording and it is a dedicated digital recording microphone. The main and major drawback is its price if it’s somewhat costly I wouldn’t mind but at this price with a plastic build, its not convincing at all. Even if are willing to spend a lot of money on ASMR microphone I would still hesitate to recommend this to you solely because of its price. 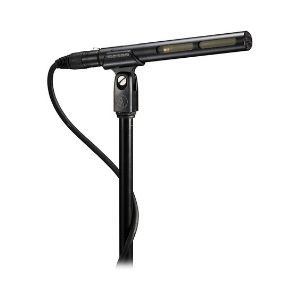 Another Audio-Technica mic but this time it is opposite of what we reviewed before, it comes at an affordable price range. Well, how the tables have turned. You may be wondering why a shotgun microphone? Aren’t we here for ASMR ones? Well, shotgun microphones focus really on in-line focus and it helps hugely in ASMR recording.

Its short length and slender design help you capturing audio from the source effectively. Its exceptional noise rejection from sides helps the mic focus completely straight on the source than the surroundings. It enhances your ASMR recording experience multifold.

Its design is what makes it exceptional, its narrow and slender design helps the microphone capture from the source effectively. Its design also naturally helps reject noises from sides even without special noise rejection hardware, kudos to design. The microphone has an amazing narrow acceptable angle. It means that the microphone can capture audio from long distances.

Being a shotgun microphone is not a flaw but people have to know that they are using a dedicated shotgun microphone for ASMR recording. Its extraordinary slender design and acceptable range give you a wholesome ASMR experience. But again the highlight of this mic is its incredible price range. Who wouldn’t want such a professional mic at this price? not only for ASMR but you can also use it for other video shoots. You can go for it if you are comfortable with using a shotgun microphone. 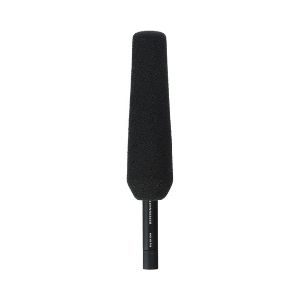 I’m personally a fan of Sennheiser. Anyone who is not restricted by budget and wants the best microphone I would ask them to go with Sennheiser. But the problem with their microphones is their cost, it’s high like way too high and sometimes if unaffordable but once again their quality is exceptional and at one point you may feel it is worth it.

This Sennheiser mic is one such product. It has some amazing features like high sensitivity, low inherent noise and completely durable. The build of this microphone is top-notch. It has an all-metal build which guarantees you durability. Its incredible and sturdy build and ability to perform in demanding environments ensure you clean performance.

A sturdy microphone is essential for ASMR recordings. It has a super-cardioid polar pattern which picks up sound effectively. Its high sensitive mic detects even low whispers effectively and gives you a crystal clear audio.

Thanks to its low proximity effect it gives you a balanced sound too so that it does not fluctuate at high frequencies. The biggest problem you may face is its price. it’s unaffordable. The price is way too high which overshadows every good thing about this microphone.

Sennheiser MKH416-P48U3 is an amazing microphone which will provide you top-notch ASMR recording experience. Its polar pattern, high sensitivity mic and metal build are highlights but once again price factor cannot be ignored. If you want the best and do not mind about the price then I would maybe recommend you to go for it but if not then no, its way too costly.

The highlight of this microphone is its proprietary capsule. Its hand-tuned gold-sputtered capsule has a machined brass plate which creates this soothing classic sonic tone. This custom made capsule shines a lot and makes your voice sound a lot smoother.

It also has a switchable high pass filter which makes the sound so pure regardless of which source it is how the voice sounds. Be it guitar amps, drums or rough voices, it captures the sound effectively. The baby bottle microphone also has a cardioid polar pattern which helps detect accurate sounds and combining it with incredible condenser capsule, it provides a perfect ASMR recording experience.

Some of the other features of this mic are its noise reduction, durability and detailed frequency response. But sadly once again this microphone to is a bit pricy. 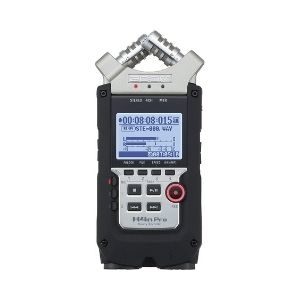 If you are tired of looking at microphones which are way out of your budget then this one is probably for you. It is a simple and handy recorder microphone with wide compatibility. Its remarkable four-channel recording gives you stable audio without any interference or fluctuations in frequency. Combined with its incredible audio handling capacity it will give you an incredible experience.

The best feature of this microphone is its portability. It’s small and handy which can be carried and used almost anywhere. It has a secure XLR connector and also supports memory cards up to 32 GB.

It comes at an affordable price range and is also compatible on a wide range of devices. Its portable nature helps you not only use it for ASMR recordings but also for other purposes.

This is not the greatest ASMR microphone honestly but if you want to have a satisfying experience at lower which can easily carry around then this may be your option. The battery life is pretty bad but apart from that it still produces decent quality audio.

First of all when I say “USB Microphone for Vocals” you would ask why USB over XLR? Why …

Whether it is live vocal, rapping, singing, screaming, or even practising, choosing the best mics for this purpose …

This site uses Akismet to reduce spam. Learn how your comment data is processed.